Skip to content
As presented on an ascending scale of science… ness.
“Sugar is as addictive as cocaine”… someone who’s clearly never tried cocaine.
Counter Argument – Level 1 (Personal anecdote/observation. ie NOT Science)
Why aren’t people walking around drinking powerade, or sugar water constantly. or distilling it down to an injectable form?
Q: Do you know how expensive drugs are? A: A fair bit more costly than a pack of sugar.
Name a delicious/craving inducing food that is ONLY high sugar…
Bread? maybe… but have you tried a a peanut butter or nutella sandwich? = Some carbs/sugar +hella fats
Cereal? Kinda… but it’s not like you’re adding it to water are you? Way better with milk!  = High Carbs/sugar +hella fats
Lollies, sure! But I don’t know about you, but I don’t often see people going through a bag of lollies a day.
Coke/Soft Drinks/juice? 100% these can present a problem. But again, here it’s the flavourings+sugar, not the sugar itself, or people would just go a cheaper option and drink sugar water constantly.

Counter Argument – Level 2 (more rant, some science)
It’s worth noting here that Dopamine is both a Hormone and a Neurotransmitter)
DA (and every hormone) is highly, highly, INCREDIBLY, context dependant. read that one more time for emphasis.
Let’s list things that trigger DA in certain contexts:
The context dependancy of Dopamine is highly affected by your mental state & your perceptions towards situations.
“Taboo”, often triggers a Dopamine release. So does anticipation of pleasure, in fact. Anticipation has more of a release of Dopamine than the actual attainment of the goal.
Sugar, may very well CORRELATE with the stimulus for for Dopamine release ie Food. But guess what, in the cases of  people on the TV Show “My Strange Addiction”, I bet you the same correlation would apply for Couches, Sand or Cat hair, in the people addicted to eating those.
I don’t know about you, but it seems hardly fair to blame Cat hair for “causing” some people to eat it. If the stimulus was non-context dependant then people who be going around trying to get arrested for that sweet, sweet dopamine release of handcuffs, and Step-Mothers would be to blame for the, frankly, terrifyingly popular use of that trope (same for Pizza-Guys in the 90’s… though maybe it’s still the sugar in the pizza? 😉 ). 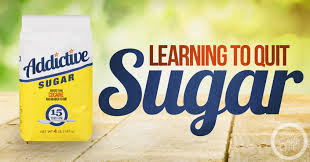 Counter Argument 3 (Science)
Dopamine works very differently depending on which pathway it’s acting in. The Mesolimbic system, is predominantly the system we’re interested with regards to sugar; here it plays a neurotransmitter role in the “Dopaminergic-Reward System”.
Here’s where the most studies are done which go from largely boring, animal model headlines and become adulterated into Newspaper Headlines and Netflix “Documentaries” (Docu-drama/comedy).
…Unfortunately (to reference one of my favourite books on subjects like this;) “I Think You’ll Find It’s a Bit More Complicated Than That”
(by Ben Goodacre).
While it’s absolutely true (well supported) that Dopamine plays a critical role in pleasure seeking and reward, it’s role is very much a grey area:
On the one hand we do have the well studied role of DA pathway altering in addiction. Though consider the cases of addicted long-term addicts who report getting no more pleasurable response from the drugs they seek, but still feel compelled to chase and consume more. Okay so, that’s a tick in the box of Sugar addiction, right?
I mean, maybe?
But Dopamine also plays a similar role in the anticipatory response in the cases of fetishes.
In both cases Dopamine is very much involved in the anticipation of the reward, almost more so that the attainment of the reward itself. Consider Gamblers who get a strong Dopamine release from a “near-miss” more so than from a actual win.
Because here’s another point; DA & the mesolimbic pathway also plays a role in the motivation and reward of AVOIDING negative stimulus. Ie PTSD Stress signalling in war veterans.  AKA The Veteran with PTSD running screaming out of a shopping centre because a light trolley collision reminded them of Nam’ in 68, is also experiencing a flood of Dopamine-driven motivation.
We also know it’s a key role in goal setting and motivation, in fact, Dopamine may be one of the key hormones involved in actually adhering to your diets… see, a little back and forth here.

The key message is this:
It’s never the fault of the Hormone. From Testosterone, to Oxytocin, to Dopamine. Humans are amazingly complex, and function in a world completely different to any other animal in regards to our social interactions and situationally dependant actions and side-effects.
Ultimately, there is a reason Endocrinology exists. And it’s not so Newspapers can write about diet.
A reminder that even at that level, the physiological mechanism are other thing, real world behavioural outcome are another thing completely!
In closing; the body is gahd damn complicated.
Send this to someone who’s cut out Sugar from their diet 😉
https://www.ncbi.nlm.nih.gov/pmc/articles/PMC6234835/
Wiss DA, Avena N, Rada P. Sugar Addiction: From Evolution to Revolution. Front Psychiatry. 2018;9:545. Published 2018 Nov 7. doi:10.3389/fpsyt.2018.00545
href=”https://www.ncbi.nlm.nih.gov/pmc/articles/PMC5174153/”>https://www.ncbi.nlm.nih.gov/pmc/articles/PMC5174153/
Westwater ML, Fletcher PC, Ziauddeen H. Sugar addiction: the state of the science. Eur J Nutr. 2016;55(Suppl 2):55–69. doi:10.1007/s00394-016-1229-6
href=”https://www.ncbi.nlm.nih.gov/pubmed/28330706″>https://www.ncbi.nlm.nih.gov/pubmed/28330706
C. Rob Markus, Peter J. Rogers, Fred Brouns, Robbie Schepers,
Eating dependence and weight gain; no human evidence for a ‘sugar-addiction’ model of overweight,
Appetite, Volume 114, 2017, Pages 64-72, ISSN 0195-6663
https://www.theguardian.com/science/2013/feb/03/dopamine-the-unsexy-truth
Postepy Hig Med Dosw (Online). 2005;59:405-20.
If you’re interested in these topics: “I Think You’ll Find It’s a Bit More Complicated Than That”, a brilliant book by Ben Goodacre. And “Behave” by Robert Sapolsky are great places to start.